I know what you’re doing, Outlander. You’re trying to lull us into this false sense of security. With your panoramic views of the beautiful Scottish Highlands. And your dancing Murtagh and singing Claire.

I will not be fooled. I know what’s coming. I know the trauma we’ll have to endure. And I have my smelling salts at the ready.

Episode 14 – The Search – doesn’t really need a play-by-play recap. It is what it is. Gangsta Jenny and Claire set off from Lallybroch to find Jamie. They meet up with Murtagh to continue the search. Murtagh and Claire try their hands at showbiz, hopefully to lure an on the lam Jamie to them. Dougal is even more of a bastard than we’ve always thought. They eventually enlist some of Clan MacKenzie (yay for Rupert and Angus being back) to break Jamie out of Wentworth prison. Still no Jamie by episode’s end. Instead of a recap, here are a few of my favorite moments from The Search. 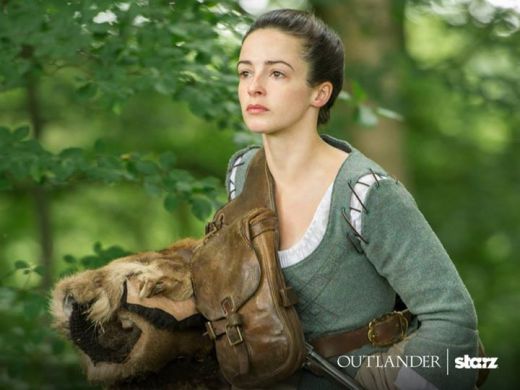 Everything Jenny did in this episode. Torturing a Redcoat, talking some sense into Claire about difficult choices and sentimentality. Tracking the Redcoats and Jamie like a champ. Touching fresh horse dung. Obviously having a va-jay-jay of steel if she can ride a horse days after giving birth. Squeezing out breast milk to relieve the pressure. Yup, Janet Fraser Murray is Superwoman. Laura Donnelly is casting perfection!

So, those bracelets Jenny gave Claire last episode that belonged to Ellen and came from a secret admirer? *sniffle* They were from Murtagh, who loved Ellen so much, he killed a boar for her and made bracelets out of its tusks. Love(d) her so much that he’s pledged his loyalty to her son with another man. I can’t with him. ::sobs::

Funniest thing ever. And how sensitive he was about his skills. God bless Duncan Lacroix. That is all.

With the exception of Dougal, I was glad to see the Clan back together. I mean really, you tell the woman her husband, your nephew, is sentenced to hang and might already be dead, and you somehow think this is the perfect opportunity to hit on her?! Again! Anyway… Shout out to Willie for having bigger balls than Rupert and Angus combined, though.