It’s safe to come out from hiding under our blankets and pillows…at least until next week. I think we all know that we haven’t seen the worst of it yet. I admit I shrank away from my TV watching the nail scene, though. *shudders* 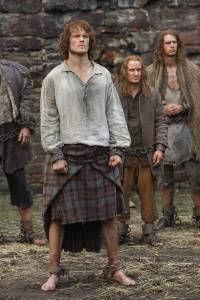 So, this was Wentworth, or at least part one, and it didn’t let us down. Right from the start, with the stark depiction of hangings, especially Taran MacQuarrie’s, you knew that this episode was going to be brutal. The choice to have Randall ride in at the last second, like some twisted dark hero to save Jamie from execution, was brilliant. We know he can mean no good.

Whatever dark places these actors had to go to for this episode and the next, well, I commend them. We got stunning performances from the three main leads. I can’t do a real recap when all I want to do is gush over these actors. 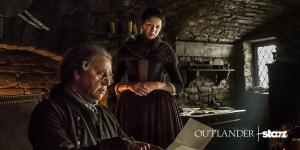 Caitriona Balfe makes Claire’s determination and heartbreak so palpable. When Sir Fletcher steps out to gather Jamie’s personal affects and she has just that small moment of breaking down is one of my favorites of the entire season. That might only be topped by her clinging to Jamie in the cell and sobbing, knowing she might never see him alive again.

Sam Heughan does amazing things with his face and eyes to show Jamie’s emotions. Stoically watching all those men go to their deaths while he awaits his own. There was relief mixed in with the fear, distrust, and uncertainty on his face in the moment Black Jack comes riding in to halt his execution. My favorite moment is when he’s reaching out for Claire when Randall has her by the neck, still in agony from the pain of that ruined hand. The only thing that matters to him is making sure she’s safe. Man, can he scream. I got chills.

Such great use of light and shadows in these scenes, Jack always half in the dark, while light gave us full views of Jamie’s every emotion. 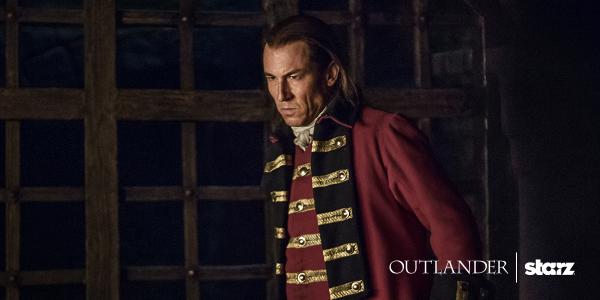 Oh, Tobias Menzies does dark and sadistic like nobody’s business and I’m a little bit afraid of him, honestly. He looked at Jamie on the gallows like a lovesick puppy, and it is disturbing, knowing that Randall only wants to crush him. I saw a post on Tumblr about people being tired of gay characters being portrayed as evil. With regards to Jack Randall, I don’t think that’s a fair assumption. First, because he’s not gay. And second, because his need to have Jamie submit to him isn’t sexual. What Jack wants is Jamie’s surrender. That’s about power. Control. It’s Jamie’s spirit that Jack is obsessed with. It’s the scarred, “dead” flesh of Jamie’s back, scars that he inflicted and lovingly kisses, that sexually excites him. He wants to break him. Sex is just the weapon of choice. Flogging didn’t do it. Nearly raping his sister didn’t quite work. Crushing his hand with a mallet didn’t either. Threatening Claire, though… This is about getting at the heart of Jamie Fraser, which I’m sure we’ll see in exacting detail next week.

Bravissimo to all these performers. I can’t wait to see what the gift us with in the season finale.